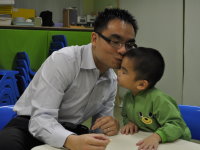 Tak was indulged in spinning cups and plates round and round alone when he was a year and a half. He rarely responded to others’ words.

At the age of two, Tak’s teachers at the nursery school observed that his behaviors were different from his classmates. He was then diagnosed with autism.

While waiting for government-funded services, his parents decided to join the self-financed Pre-school Holistic Training Programme for Children with Autism of Heep Hong Society. Every weekday, from 9:00 am to 12:00 noon, Tak received his physiotherapy, occupational therapy and speech therapy at a Heep Hong centre, enjoying the abundant teaching resources there for a monthly fee of HK$8,000.

Over the course of two years’ training, Tak has made encouraging progress in his social skills, behavioral management and language ability.

In terms of social skills, he indulged in his own world in the past, seldom came into contact with people around him. To him, it seemed that it did not matter who held him in his / her arms. Nowadays, when his parents deliberately left him at home, he will burst with tears and anger; he will also kiss his dad when the latter returns home from work. The expression in his eyes is somewhat different when he looks at his dad, a sign of knowing his significant others.

With regard to behavourial management, Tak consumed potato-chips and milk only and flatly rejected any other kinds of food, including ice-cream. He was characterised by self-stimulating or rigid behaviours. Nowadays, he takes delight in various kinds of food, and is able to use objects according to their designed purposes.

In respect of language ability, Tak could only cry for what he wanted in the past. Now he is able to get his needs across with the aid of picture cards, and simple sounds.

In August 2011, when Tak was 4 years old, he was finally admitted to a special child-care centre of Heep Hong. His dad exclaimed, “If we had not joined the self-financed programme at Heep Hong two years ago, my son would have wasted 2 years of early intervention in waiting for government-funded services. Regrettably, HK$8,000 is beyond the means of most low-income families. I trust that generous financial support from the public plays a vital role for their access to timely training.”